Born December 9th,1940 , has been making masterworks in clay for 50 years. In 1959 after graduating from high school he enlisted in the U.S. Navy where he spent the next two years serving his country as a Sea-Bee .After Curtis left the Navy he attended Wisconsin State University, River Falls where he received his Bachelor in Science in 1965. Following His undergraduate studies he attended the University of Wisconsin, Madison, Wisconsin, receiving a Master in Fine Arts degree in 1967. From 1967 to 2008, Curtis was a professor of art at the University of Minnesota, Minneapolis, Minnesota. He is currently Professor Emeritus. 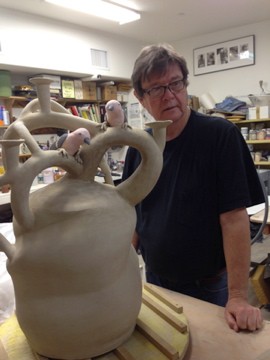